Once upon a Khari 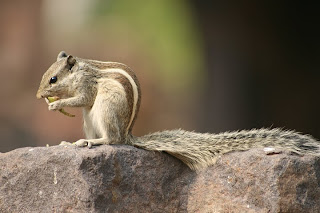 While I'm waiting for my visa in Mumbai, my Mom seized the opportunity to get me to clean my shelves. As I reluctantly threw away old newspaper and magazine cuttings, tore old notebooks and diaries I found a very old notebook I used to maintain ten years ago. It was around the time I wrote for Free Press Journal and The Times of India. Many a times I'd scribble my articles in the notebook before typing them out and mailing them to the Editor. Most of them were published. Some of them were never sent to the newspapers.
My family, for most of my school and college going years, consisted of my grandparents and the numerous animals that had made our house their home. Most were rescued and lived with us until they recovered. Some of the rescued animals and birds continued to live with us for the rest of their lives. We tried releasing every single one of them after they got better but sometimes it didn't work.
As I flipped through the pages of the old notebook I found something I'd written and forgotten about. I probably intended to mail this one to Reader's Digest but for some reason never got down to doing it.
I'm going to put it on my blog because I think it's a story that deserves to be heard/read.

Khari died today and it feels like a part of my family is gone.

Khari was a part of my family and as I write about her I know my words won't do justice to my memories of her. I can clearly remember the day I found her 5 years ago on a June afternoon. Helpless and tiny, a scared little fury creature that happily nestled in the palm of my hand for warmth and protection. I held the little squirrel close to my body and got her home in a BEST bus on my way back from college. Through the journey she made herself comfortable against my clothes and fell asleep.
Back home nobody was as surprised to see a baby squirrel because I always brought home injured birds and animals that needed tending. I was worried that my Mom/Grand Mom would be angry but one look at the baby squirrel and she'd already won a place in their hearts and in our house.
A squirrel in Marathi is called 'Khar' and since we hadn't thought of a name for her I referred to her as Khari. By the time I thought of a name for her we were so used to calling her Khari, that the name stuck on.
For the first few weeks, since she was too small to eat, we fed her milk with an ink dropper. Soon Khari was eating everything from varan bhat, which we fed her one tiny morsel of rice at a time, to fruits and her favourite - dry fruits. She'd hold little pieces of cashew nuts or almonds in her little hands and munch away.
As she got older, Khari got naughtier. She would run all over the house, climb curtains, crawl inside pillow covers, chase her own tail in circles!! She'd decided that socks were the perfect material for a cosy bed and would crawl inside my sock at night. My grandfather made her a little wooden box with a small circular entrance(like a bird box) and attached it inside a cage he made for her. We usually kept the cage open all day to allow her to move freely in the house and the terrace. At night we locked the cage door for her own safety. Snakes, rats and cats were very common around our house.
Khari readily accepted the box for her home and carried her bed(my sock) with her into the box.
Now she set upon herself the task of making her home cosier and began tearing little shreds off pillow covers, curtains, my grandfather's shirts and would scurry with them in her mouth. She would playfully tug at my grandmother's saree pallu and try to carry the whole thing back to her box. What a comical sight that was!!!
It was now time to keep Khari off limits from the bedrooms. I hoped to set her free and wondered if she could fend for herself or was she too tame to fear other humans who were a potential danger to her. We placed her cage in the balcony and left the door open all day. Khari didn't venture too far from her box. She would spend the day running about the terrace, climbing the potted plants and then retiring to the safely of her cage every evening.
Khari never outgrew milk and waited each morning for her little bowl. While my grandparents sat in the balcony and sipped on their tea, Khari licked her bowl of milk. She also relished chocolates(especially M & Ms and chocochips) and would lick her tiny fingers clean after a chocolate treat.
Gujarati Ganthias were her favourite and I'd insist that she shouldn't be fed with too many of those since she was already sporting a pot belly.
Khari loved having her head and back stroked and when I rubbed behind her little ears she'd stretch out with ecstasy.
Although she had a lot of opportunities to return to the wild, Khari never wandered away from home. Over the months and the years that followed our attachment for her grew. When you watch an animal grow and tend to it like it were your own baby you feel a sense of pride, fulfillment and satisfaction at giving it a good life.
Pets don't last your lifetime and you usually outlive them. You feel the pleasure when they're a part of your life and the terrible pain that stays for a long time after they pass away.
I know a lot of people who despite their love for animals don't want to keep a pet because the attachment is so much that dealing with their death is unbearable. Pets become like family members.
I think differently. It's true what they say about love(even in the case of a pet); it is better to have loved and lost than never to have loved at all.
Five years and two months from the time I found little Khari, she passed away quietly and suddenly without a warning. We shared an apple one afternoon and then I decided to read a book. I dozed off reading and when I woke up it was time for Khari's evening snack. As i reached her cage with some peanuts I saw Khari lying still on the floor of her cage. Khari hadn't suffered and was fortunately in good health until the end. She was just as playful and naughty as she was when she was a baby.
We buried her in our backyard and through my tears I thought about all my best memories of Khari.
As I write this I hope Khari lives on not just in my memory but also in the memories of people who read about her.
Posted by Laxmi Salgaonkar at 11:57 AM 11 comments:

Email ThisBlogThis!Share to TwitterShare to FacebookShare to Pinterest
Labels: My family and other animals
Newer Posts Older Posts Home
Subscribe to: Posts (Atom)