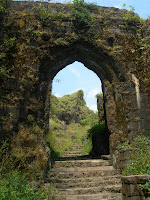 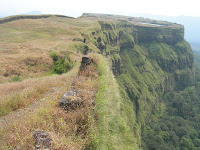 The monsoon had beaten it's annual retreat leaving us PMSing (Post Monsoon Stress) with the advent of the October heat. Hoping to escape the grueling weather in the city we planned another trek.
We caught a 6am State Transport bus from Dadar and headed to Lonavala via the old Mumbai- Poona Highway. The old bus groaned as it climbed the winding ghats. Nonetheless, in a couple hours we were at the Lonavala ST stand just in time for a hearty breakfast at Ramakrishna.
Idli, dosa, hot samosa and a masala chai later we hopped into a sumo we'd hired and set off on our 20 km drive to the base village- Peth-Shahpur. The village of Peth-Shahpur is en route to INS Shivaji and Sahara Group's Amby Valley.
We parked our vehicle at the base village and started our trek.

The Koraigad fort is atop a steep hill at the height of 3,000 feet above sea level. The climb, although it looks steep, is fairly easy and takes approximately an hour. The path to the fort is along a flat plain initially and is covered with a carpet of yellow blossoms and multitudinous butterflies . It then winds though a moderately wooded path through a canopy of vegetation until you reach the steps of the fort. The climb is rendered much simpler because of the steps and yet it is steep and can leave you breathless.

It took us longer than an hour to get to the top. We stopped every now and then to admire the caterpillars and butterflies, to photograph the fort, a Ganesh Temple on the way, a few caves that were possibly granaries.
We entered the fort through the main darwaja
atop which a saffron flag fluttered in the wind.
The fort has no tree cover and is an expansive table land covered with fresh water ponds. The monsoon had left the fort covered in weeds and grass and the October sun beating down on it had transformed it into a yellow grassland. We explored the fort for a couple of hours letting the sun burn our skin despite the sunscreen, glares and hats we wore. We walked along the periphery of the fort and the sight is one to behold...the Mulshi lake, the mountain ranges, a bird's eye view of Amby Valley, an airstrip with a biplane and the Dukes nose in the distance.
The fort houses an ancient temple with a 4 feet tall statue of the goddess Koraidevi and a number of cannons. There is no food available on the fort and we sat along the largest pond, our tired feet soaking in the cool water, munching on the snacks we'd carried with us. Soon the sun was overhead and despite the the breeze our sun burnt skin coaxed us to leave the fort and start our descent. The climb down is much simpler. Soon we were back at the base village and in our car headed to Lonavala.

After a late lunch we caught an ST bus back to the city. Twelve hours after we'd started our journey from Dadar we were back in Mumbai..a little tired, very sun burnt but mostly happy from our little get-away from the city.
Posted by Laxmi Salgaonkar at 7:10 PM 3 comments: