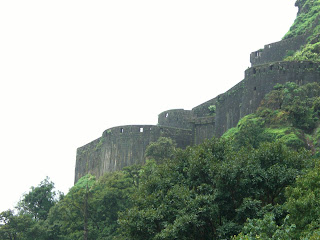 The Indrayani Express lugged through the rain drenched ghats in the early hours of the morning. We alighted at Lonavala station to find out we'd just missed the local train to Malavli. It didn't dampen our spirits. A hot cuppa tea at the station and off we went to Malavli by rickshaw.


From Malavli station we started our walk, past the railway crossing, a bridge over the expressway, through the Bhaje village and soon we were trudging through slushy paddy fields. A crab popped out from under a rock to say hello and a pair of startled brahminy mynah's took to flight. A cool breeze enveloped us and we were intoxicated with the sights, the smells and the sound this scenic setting had to offer.


The rain gods had finally obliged and waterfalls rushed down the hillside and transformed into gurgling streams.


We reached the road that leads up to the base village. Although motorable I'd only drive up that road if I'm allowed to drive a hummer. The road wound and climbed, leaving the inexperienced trekker a little out of breath. We stopped often and flopped ourselves on little rocks along the way, more to admire the breathtaking view than to rest. In the distance another local train blew it's horn and snaked it's way to Pune. Above us the twin forts of Visapur and Lohagad towered like benevolent monarchs. Their history excited and intrigued us.


The history of Lohagad can be traced back to many dynasties and time periods - Satavahanas, Chalukyas, Rashtrakutas, Yadavas, Bahamanis, Nizamshahis, Mughals and Marathas. The mighty fort, which is one of the better preserved ones today was captured by the Maratha ruler, Shivaji in 1648 AD. The treaty of Purandar forced Shivaji to surrender the fort to the Mughals in 1665 AD but he recaptured it in 1670 AD using it to hide a huge treasure he amassed when he raided Surat. Some people believe the treasure is still hidden on the fort waiting to be discovered.


Soon we were at Lohagaon, the base village. A village stall promised hot bhakris with spicy zunka and even fiery hirvya mircha thecha.


We placed our order and started our ascent up the steps to the Iron Fort. Hordes of monkeys climbed down the walls of the fort to inspect the human invaders. Some pensively watched from the distance and the bigger, bolder ones even barred their teeth in warning. Undeterred we continued through the four huge doors leading up to the fort. First through Ganesh Darwaja, past Narayan Darwaja and Hanuman Darwaja and finally Maha Darwaja we were atop the fort. The fort has remnants from the Mughal as well as the Maratha rule...an old cannon, water tanks, temples, dargas...


We walked through the clouds, the rain coming down in torrents, the roaring wind threatening to blow us off the fort. By the time we'd scaled the length and breath of the fort we were drenched to the bone, our teeth clattered and our muscles ached for warmth but our hearts were captivated by the beauty it had to offer. Our stomach's reminded us of the hot lunch that awaited us at the village.


As promised, the Maharashtrian lunch followed by piping hot adrakwali chai were delicious. Satiated after a delectable meal and warm after a change of clothes we bid our adieus to the hospitable villagers and started our journey back.


We still had one more detour on our agenda. The waterfalls we encountered on our way up extended an invitation which we readily accepted. The cool water engulfed our tired bodies as we lowered ourselves on the rocks. The veiled sun was slowly moving across the sky towards the horizon. Soon darkness would set in and it was time to head back to Malavli.


We got into the local train at Malavali, got off at Lonavala to pick up chikki and fudge and then boarded a bus back to Mumbai. Weary, we rode in silence. Some fell asleep. I shut my eyes and savoured each moment of my blissful trip to Lohagad.
Posted by Laxmi Salgaonkar at 10:54 AM

Email ThisBlogThis!Share to TwitterShare to FacebookShare to Pinterest
Labels: Wanderlust

nice description of the trek and history of fort....