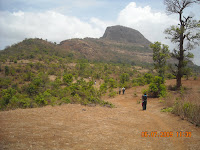 This year has been exceptionally hot and since patience is a virtue I don't really possess we did our first monsoon trek before onset of monsoon. We chanced upon 'Green Carpet' and their plan to trek to Sindola Fort on 7th June and decided to join in.

Sindola(1395m/4577ft)
As seen from Bhandardara lake, straight in line with the damn wall in the south east is Sindola. It is a good climb above Mutkhel, which is an important village on the south-western shores of the lake.

The author classifies it as an easy trek but I'd say otherwise. Our five-people-group started at 5am from our respective houses in Mumbai to reach Kalyan Station between 6:30 am and 7am. By the time the 'Green carpet' bus left Kalyan station, at almost 8am(an hour after the scheduled departure time), stuffed with trekkers like a gunny bag carrying potatoes in a truck, we'd begun to lose our enthusiasm. The bus journey to Malshej ghat was deafening; most of the 35 odd people in the bus started singing, in chorus, their remixed versions of bollywood's most annoying songs. The idea of a short nap on the journey had to be dismissed as even a conversation with the person sitting next to you was impossible considering the decibel levels. After a long halt for breakfast and another hour of singing we finally alighted from the bus at a spot in the middle of the ghat. The Padmavati river snaked through the valley to our left and to the right in the distance we could see the Sindola Peak. The initial journey was easy with a gradual climb but the sun was high in the sky and beat down on us, dehydrating us and making the climb very tiring.
Soon the easy part was over and we started scaling the sides of the hill with very poor foothold and loose rocks and scree. To our left was a fall, straight into the valley. For the experienced trekker Sindola wasn't as difficult a trek but it definitely wasn't easy either. I discovered a fear of heights for the first time. My feet struggled for a foothold(my woodland shoes didn't help much)and thorns dug into my palms as i struggled to hold on to the sides of the hill. Looking down at the valley I felt my head spin and the rest of the trek seemed stressful and like a fight for survival instead of the pleasurable trip it was meant to be.
Despite the odds we made it to top. The view was breathtaking but barring two small idols cut in the rocks -Hanuman and Ganapati - the top of the hill bore no evidence of the fort or the watch tower. The highlight of any trek is either the journey or the destination and this trek was treacherous without much to see on top.
As we finished our lunch we saw very menacing looking clouds over the adjacent hilltops and before we started our journey downwards the wind began to blow so hard that it threatened to blow us off the hill. In minutes the rain followed and soon we were drenched to the bone. The rain stopped in less than fifteen minutes but it ensured that a part of the journey back down was rendered slippery.
With terrible cramps in my left thigh and my newly discovered phobia of heights my feet refused to move. A couple of hours later, with help from two other trekkers, I finally made it off the most difficult part of the hill. The sun was back, our clothes were dry and a sense of accomplishment was slowly taking place of the fear we held on to all afternoon.
I'm sure I won't attempt Sindola Fort again....I'm not sure I even want to call it a fort!!
Posted by Laxmi Salgaonkar at 5:21 PM

Email ThisBlogThis!Share to TwitterShare to FacebookShare to Pinterest
Labels: Wanderlust

i've always thought the 'enjoyable' part of any trek was when it was over and you were talking about it over a drink! i've only been on 2 hot dry treks, and i must admit they were the toughest. btw, did you write your northern trip?

no.....i haven't written about so many trips....looking at maah blog after months...

This place was good only looking at the hot sun, there are only few places in the western ghats which can be trekked in summer.